The only one of its kind.

The Problem with Conventional Screens

The problem associated with the use of conventional single deck screens used on shale shakers is associated with optimizing the removal of the cuttings; the more cutting removed the better which entails the selection of finer mesh screens, and the loss of drilling fluid which is exponentially proportional to the surface area of the cuttings removed.

The effect for the driller is essentially a uncompromising one, if he selects coarser screens his fluid systems properties deteriorate and the drilling process is impeded and can be catastrophically affected, if the driller selects finer screens the fluid properties are maintained but the losses of drilling fluid increase due to replacement costs and disposal fees.

Additional Effect of Conventional Shaker Screens:  Causes large and small cuttings to be separated at the same time. Creating the following Problems.

The intent and purposes the Dual-Screen™ or Double cut screen is a simple improvement over the conventional screen. It has a different composite/plastic core that allows for the mounting of an upper screen and a lower screen and provides for a channel in the center which allows the fluids and cuttings to be processed on two levels concurrently.

This technology stacks one coarse separating screen above a lower finer screen which causes the coarse cuttings to be separated onto an upper screen level from the finer cuttings which are relegated to a lower screen level. By doing this the coarser solids; which are conveyed more rapidly by the vibrations of the shaker off of the shaker, do not interact with the slower moving finer solids which are on the lower screen. The result is a more effective removal of both fine and coarse material, reduced interaction of cuttings and a complete lack of requirement for the tilting of the shaker against the flow of the cuttings. Another advantage of this approach is the separation of the cuttings in this manner allows for less solids on each screen which means more open area for the fluid to pass through which reduces fluid losses as well. 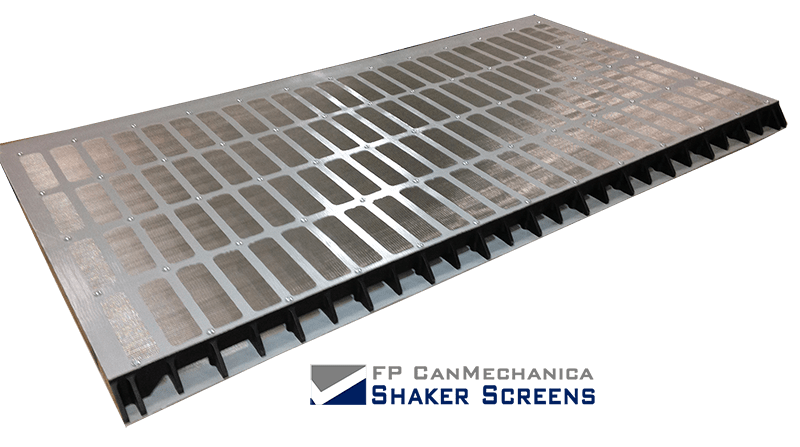 The technology developed by FP CanMechanica™ has been evaluated in field trials and test labs in the US and Canada and the results are more than encouraging. Trials show that shaker flow handling capacity can increase up to 210% and that it was impossible in testing to “sand off” the screens (Sand off is a procedure for trying to plug all the screen openings by pouring a sand of multiple sizes onto the screen in an attempt to plug all the openings)

Further, testing in the field with Talisman Energy (Now Repsol) and confirmed by independent labs has shown that the level of fluid losses using the Double-Screens™ is lower than levels achieved with the most advanced vacuum supplemented Shakers which incur daily additional costs of $600-$1000. These screens potentially pay for themselves in as little as 2-3 operating days.

The video to the right shows a side by side comparison between, Convention metal single screens (NOV/Brandt Screens)  On the Right, and Dual-Screen™ on the left.

Dual-Screen ™ accomplish every goal that can be achieved by fine shaker screen operation.

FP CanMechanica™ has spared no expense when it came time to manufacture our screens.  The video to the right shows our manufacturing processes for our chassis.